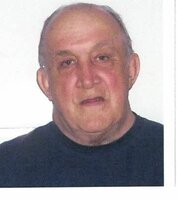 It is with great sadness and heavy hearts that the family of the late Gerard Joseph Ryan of O’Regan’s, announces his peaceful passing on Tuesday, November 2, 2021, at the age of 81, with his loving family by his side at Dr. Charles LeGrow Health Centre. Born in Cape Anguille, he was the son of the late Joseph and Loretta (nee Patry) Ryan. Gerard will be sadly missed and never forgotten by his loving wife of 57 years, Cecilia (nee Luedee); his children Glenn (Toby) of Hamilton, ON, Donald (Belinda) of Shubenacadie, NS, Stephen (Sharon) of Beaver Bank, NS and Jennifer (Shaun) of Port aux Basques; his grandchildren Zachary, Tristan, Tanner, Mackenzie and his newest grandson Logan, who was his pride and joy; and great-grandchild Avery. Gerard will also be remembered by his loving sister Yvonne McIsaac; his brothers and sisters-in-laws Bernice Marks, Lucine Anderson, Anne Marie (Alex) Carter, Bernard (Adeline) Luedee, Gordon (Betty) Luedee, Gerald Ryan, Peggy Luedee and Eleanor Luedee, as well as a large circle of nieces, nephews extended family and friends, he will also be forever missed by Cynthia Ryan. Gerard was predeceased by his mother and father-in-law, Nicholas and Mamie Luedee; and brothers and sisters-in-law, Adele and Bernard Wall, Leo Luedee, Margaret Rose Ryan, Cyril Luedee, James Luedee, Llew Marks and Alfred Anderson. Gerard began the first 20 years of his career at Newfoundland Tractor in Corner Brook, followed by the remainder as foreman at Connor Bros in Isle Aux Morts. During his working and retirement years he touched the lives of many, gaining respect and acquired lasting friendships. He enjoyed gardening, quiet walks in the woods, working on his old Willys jeep and a game of cards with family and friends. Gerard was an animal lover and enjoyed many pets over the years. His greatest moments were spent with his family, especially his 5 grandchildren and great-grand daughter. He will be sadly missed and fondly remembered by all who knew him. In keeping with Gerard’s wishes, cremation has taken place. Family and friends may visit St. Ann’s Roman Catholic Church on Sunday, November 7 from 6:00 to 8:00 p.m., from where the funeral mass will be held on Monday, November 8 at 11:00 a.m. with Father White and Father Patry officiating. Interment to follow at Mount St. Thomas Cemetery. In lieu of flowers, donations in Gerard’s memory may be made to the Heart and Stroke Foundation or charities of one choice. Funeral arrangements were entrusted to Oceanside Funeral Home, 23 Read Street, Port aux Basques, 695-7010. Words of comfort can be sent to the family by visiting www.oceansidefh.ca