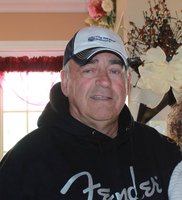 It is with great sadness and the heaviest of hearts that the family of the late Bernard Percy Sheaves announces his passing on February 21, 2021 at the Health Sciences Centre in St. John’s at the age of 70. Born in Mouse Island, Bernie was the son of the late Percy and Mary (nee Strickland) and son in law of the late John and Bertha (nee Skinner) Osmond. Bernie leaves to mourn with fond and loving memories, his best friend and wife of 52 years Marina (nee Osmond), his daughter Lisa (Duane) Pike, Georgetown, ON and son Lorne (Sherry), Reidville, NL and his grandchildren Jillian, Ryan and Amber. Bernie will also be dearly missed by his brothers and sisters, Loretta (Edward) Patey, Ruby (John Neil) Feltham, Maggie (Colin) Garnier (Stephenville, NL), Henry (Darlene) Sheaves and Theadore Sheaves and his Aunt Maggie White (Hamilton, ON); as well as his brothers and sisters in law Kyrle (Vera) Osmond, Minnie O’Quinn, Jeremiah (Mary) Osmond, John (Nina) Osmond (Stephenville Crossing, NL), Ruby (Gary) Chaffey and Marie (Fred) Manuel, as well as special family cousin and friend Ches Skinner (Lethbridge, AB). Bernie also leaves a large circle of nieces, nephews, close family relatives and many, many friends. Bernie was predeceased by his brother Stuart, sister, Eileen, brothers in law, Calvin Feltham, Roy Osmond, Eric Gilliam, John O’Quinn and Max Simms, sister in law Betty Simms and niece Sherry Kendall. From a very young age Bernie had a passion for music. He fondly spoke about growing up in Mouse Island and playing in his first band The Starlighters with his childhood friend Harold Osmond raising funds to attend Boy Scout camp. From that time, his passion for entertaining and writing his own music began. Bernie played in many bands over the years with those who shared the same passion. One of his greatest joys was playing at Scott’s Cove with Bruce and Bob LeRiche and Wallace Gale entertaining locals and tourists. He loved his fans. Dad always said as he got older he always felt 16 years old on stage. Our wish is that he will be forever 16 in heaven. The family would like to thank the doctors and nurses at the Charles L LeGrow Health Centre and the Cardiac Care Unit at the Health Sciences Centre. In keeping with Bernie’s wishes, cremation has taken place. There will be no formal visitation or funeral service at this time. A Celebration of Life will be planned for a later date. In lieu of flowers, donations can be made to charity of one’s choice. Funeral arrangements were entrusted to Oceanside Funeral Home, 23 Read Street. Words of comfort can be sent to the family by visiting www.oceansidefh.ca As Bernie would always say, “Friends are better than money.”